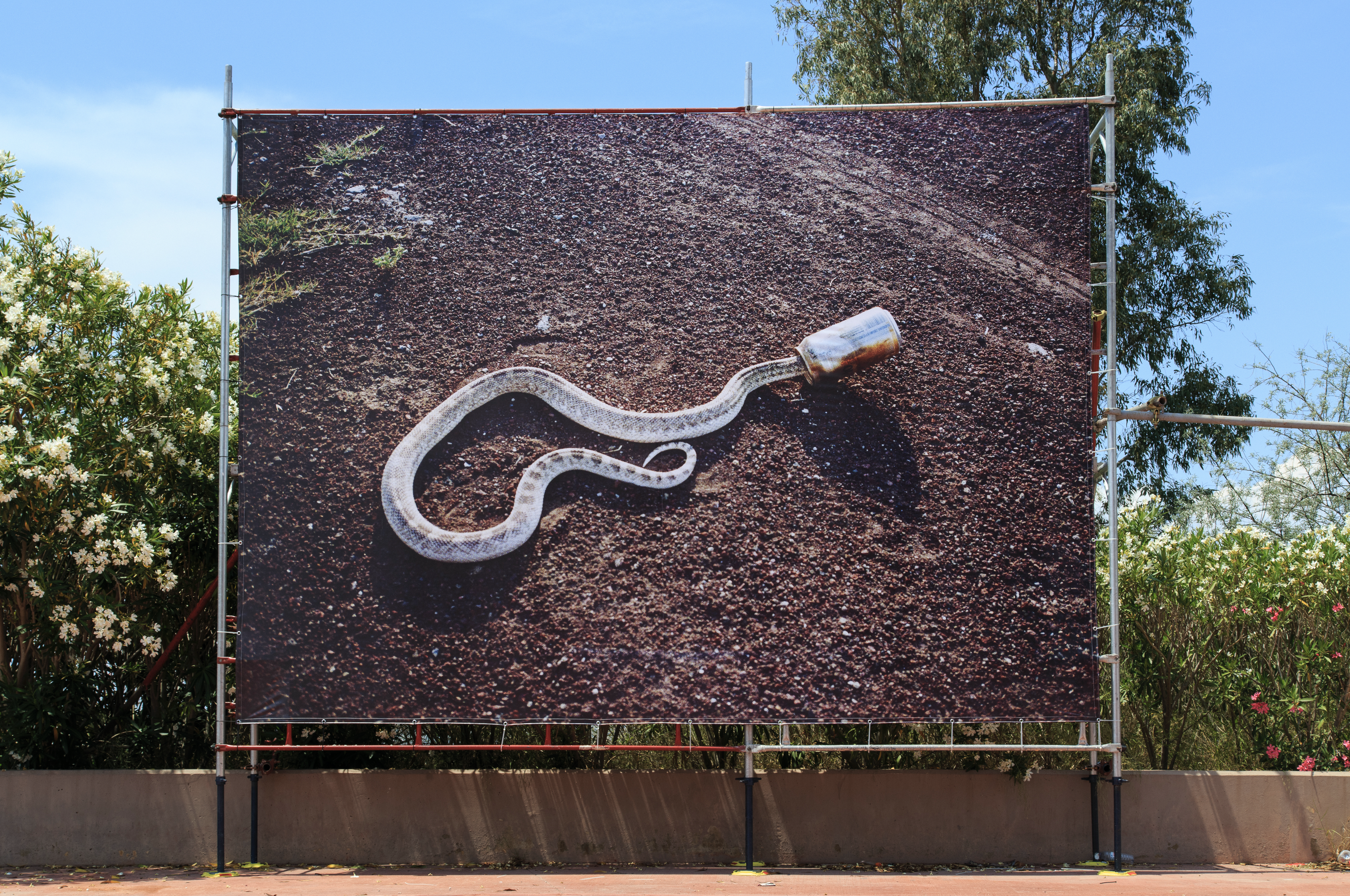 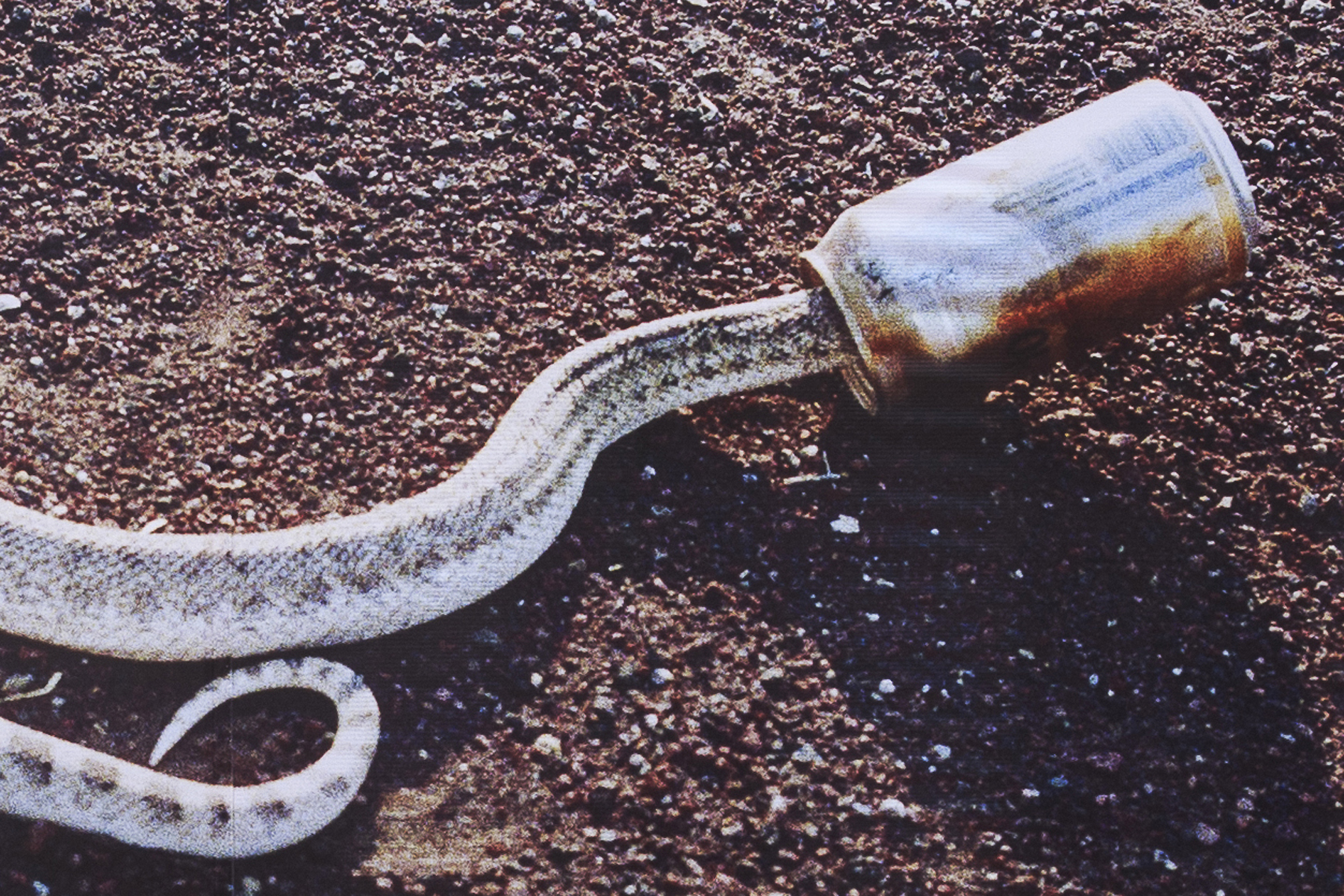 The Viper and Evil

What’s inside an old can of consumed beer? Everything that imagination can conceive and name: a shell or a stone; urine, spit or swamp water; a flower or a 100-dollar wad of cash; the message of a dead person or an army of ants. In an essay about animal language, George Steiner wrote that what can’t be named, can’t be prohibited. And he added, “the passage of man from a natural state to a cultural state —the most important act of his history— is linked to his capacity for language.” So then what does an image or photograph transmit before its passage to articulated language (which possesses verbal structure or syntax, grammatical rules, metaphoric capacity, etc.)? What happens before its explanation or translation into words? Still no one can respond to this question with total certainty or acceptance. The suicide of a photograph is its translation to any organized language. The territory of symbols and signals that aren’t merely descriptive or lack precise function is a discontinuous terrain, abrupt and plagued by accidents. Part of Miguel Calderón´s full body of work is formed by images that are obscene and cryptic in appearance. His vocation becomes a little more evident in sketching with images an experience still under construction, a pause understood as a totality and an end in itself: experience, pause and indecent humor. If the act escaped his gaze then the act would remain lost in the world of words and things. The cunning eye of Miguel Calderón resists such loss and seeks to abstract or alleviate the dominant gravity of both spaces: to ease the burden or bulk of words and meaningful things (that is to say, useful images, directly informative and amiable to experience). I don’t think Miguel wants to say anything specific to us, but rather express the findings that his intuition and lived circumstance have put on the table. He doesn’t know how to say no to the act or phenomenon that seduces or intimidates him: he opens doors without asking. In this image, the snake is hunting. Is there a mouse in the beer can? We don’t know. What we do know is that there is a new symbol, an instant metaphor: the inebriated, shy or thoughtless snake. We’ve seen human beings slither on the ground just to get some residues of alcohol. Why shouldn’t an animal that crawls due to its nature do the same? The image is unusual, shocking and bizarre.

The serpent represents a mythical animal in Mexico’s past, but before the historical or anthropological myth, there is a game of interpretation that begins when Miguel discovers a scene showing the canned ophidian thrown toward an astonishing and derisory fate. Is it a simple boutade? No, the consequence of a work cemented in paradox and malice is usually unexpected. Writer Thomas Bernhard knew, as he expressed in a conversation with Krista Fleischmann during the eighties, that writers and artists turn evil when they have taken full dominance of their work as they get old: “Since I’m curious and evil I can only aspire to become even older, more evil and write as best as possible.” Substitute the word write for photograph. The joke of death is disconcerting because behind it is time, decay, irony, aversion and open laughter. The viper meddling in the can is at once trapped by tenacious curiosity, malice and a falcon instinct whose prey forms the visual and iconic imagination of Miguel Calderón. The image of this serpent doesn’t constitute a precise history or describe any methodology; before the act that is shown there is neither past nor future. What exists is the mute encounter, the amazement or interpretation of the spectator: a game of deformed mirrors, equivocal references and an intransitive or ambiguous sense of humor. As soon as we name something, we twist or deform it. As soon as we see the image that excites or astonishes us, it is lost in the trashcan of other minds and sinuous fields of unforeseen translations. There is only real movement on the floor and above ground. Dragging along, we put our head in the beer can, which sometimes is art itself: pure inebriation and doubt, paradox and sarcasm, evil and interpretation.

Like Antonin Artaud, I believe that cruelty, exaltation and force are the purest substance of an artistic act, and that the word should leave behind social comfort and puppetry to show emptiness, fear and laughter exploding in an image trapped in fraganti. I encounter that force in every season of Miguel Calderón’s work, each more solid and poignant than the last.