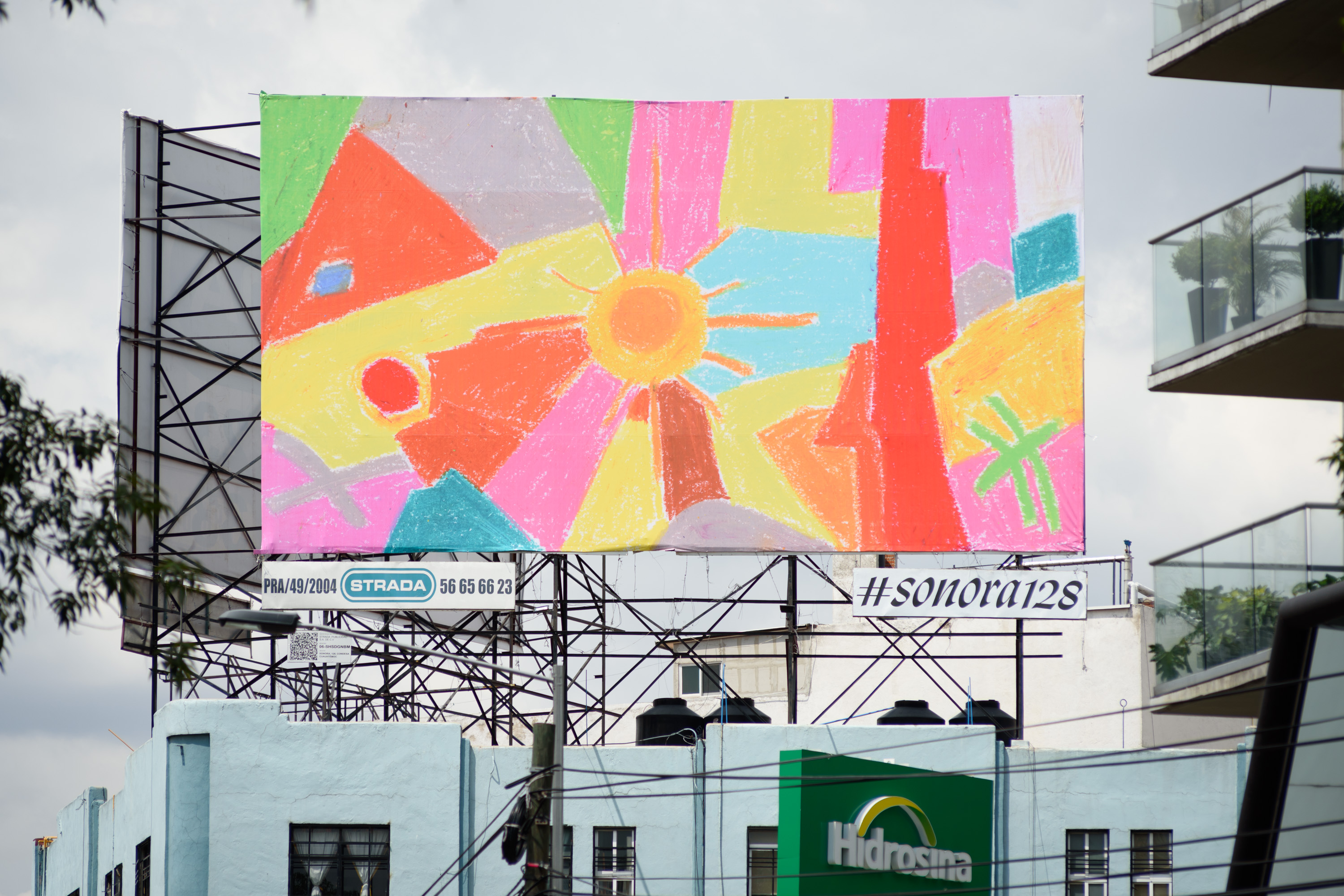 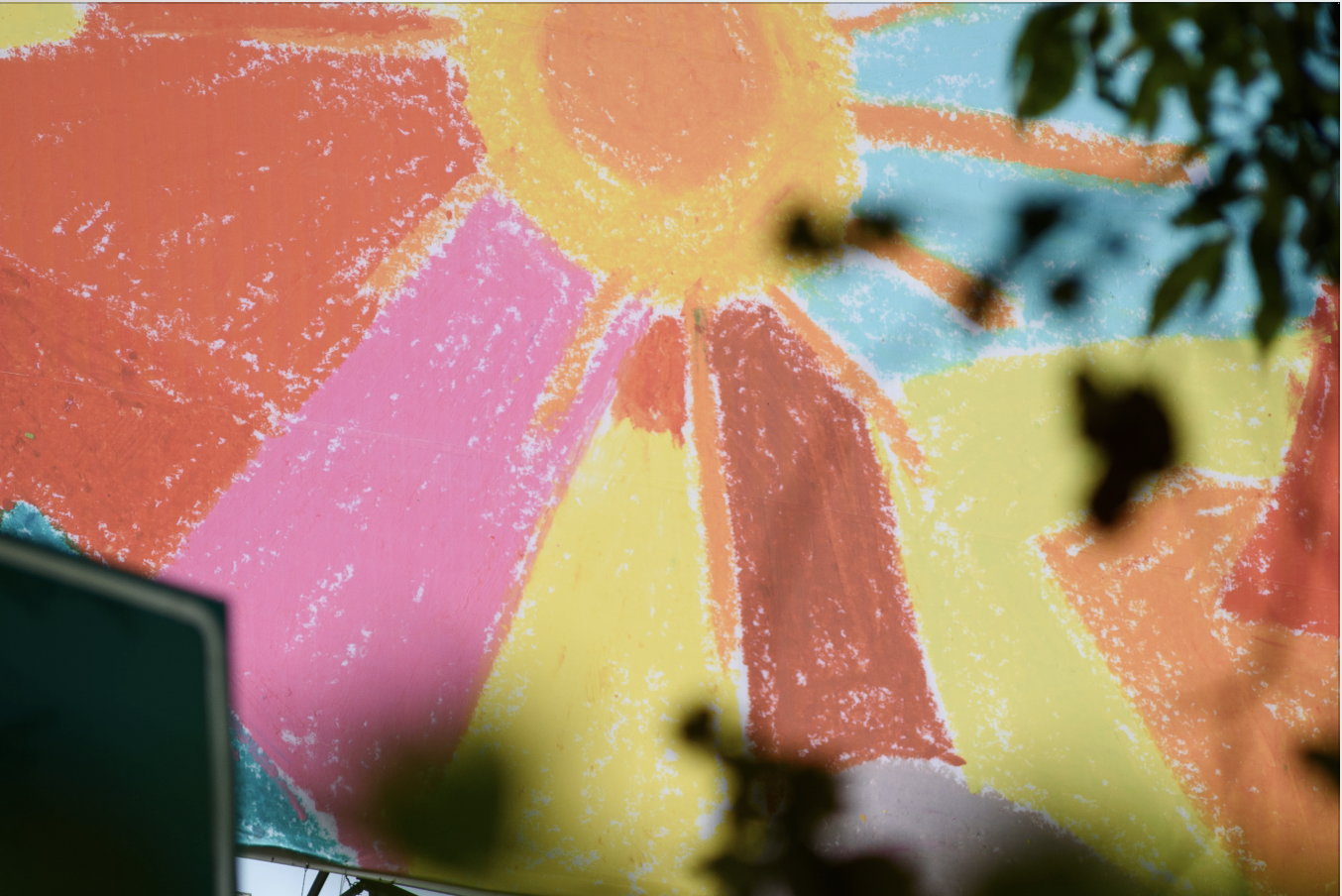 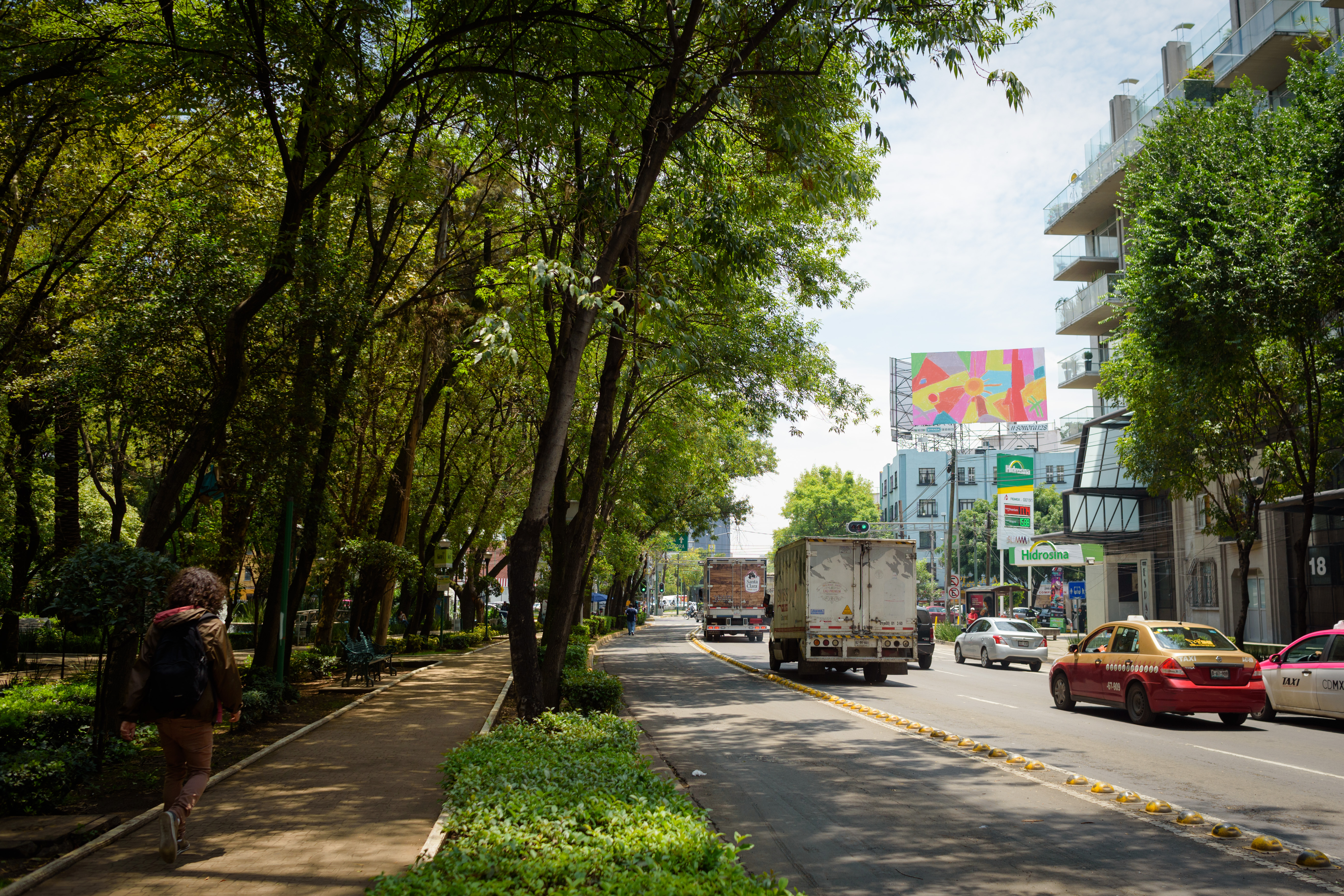 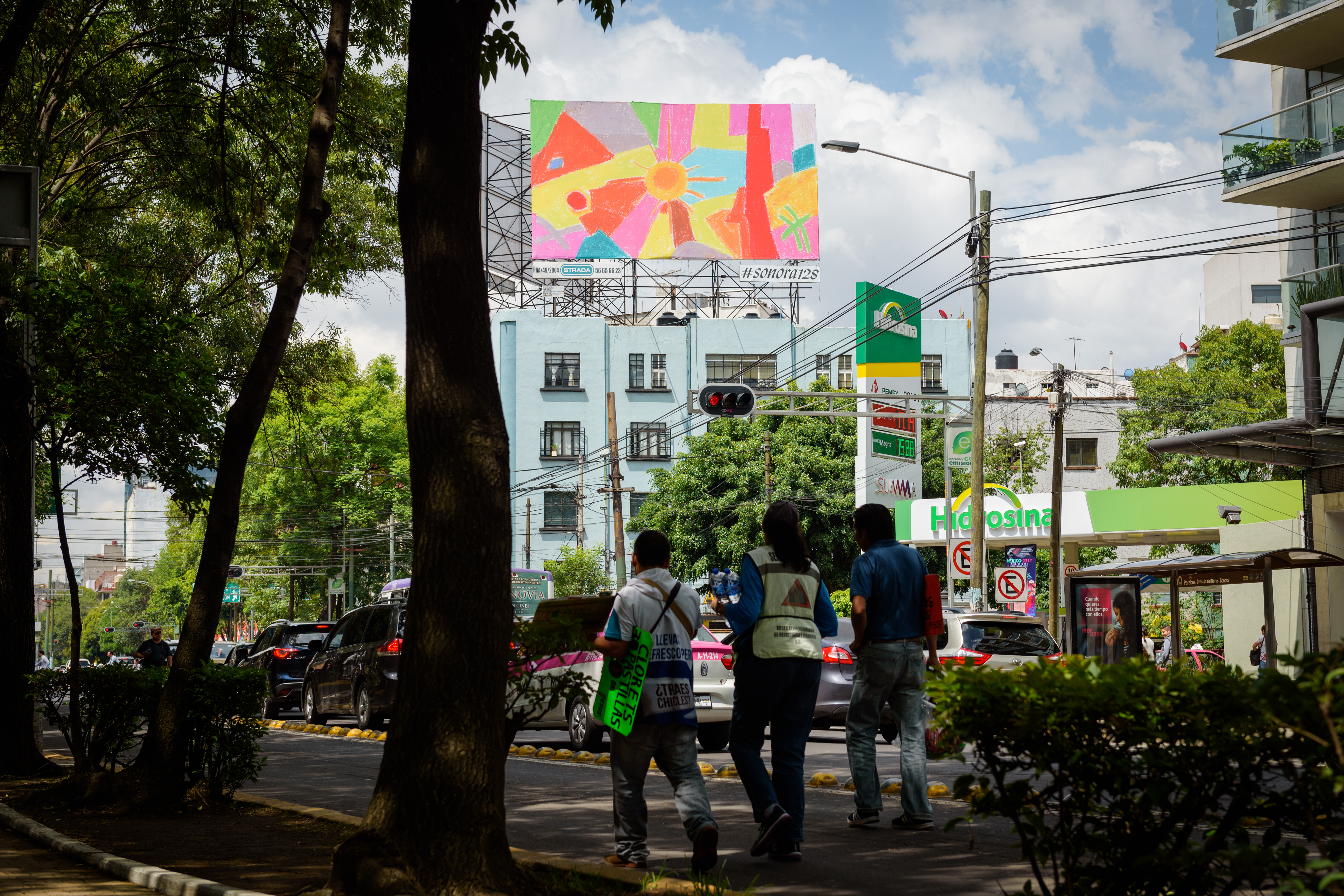 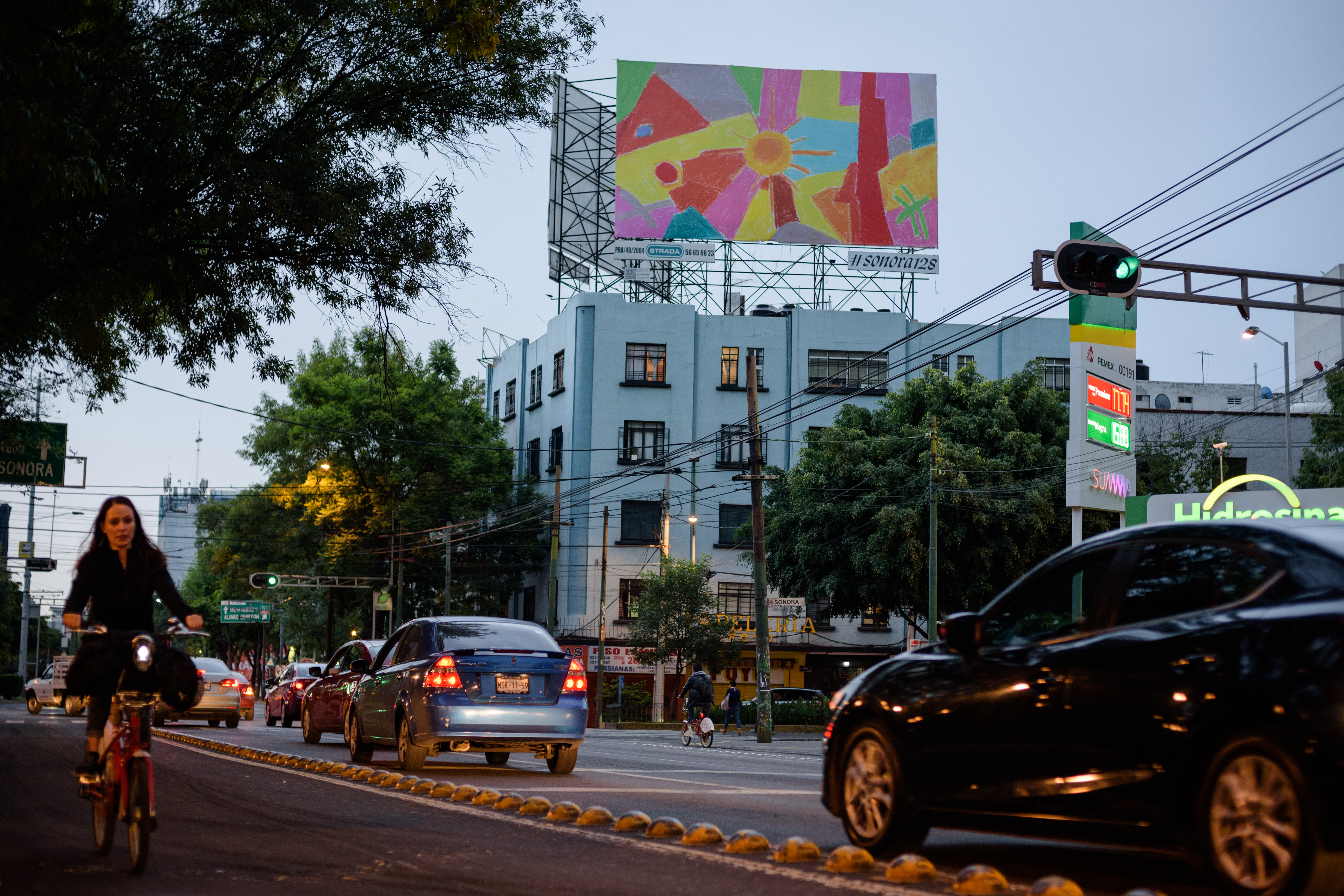 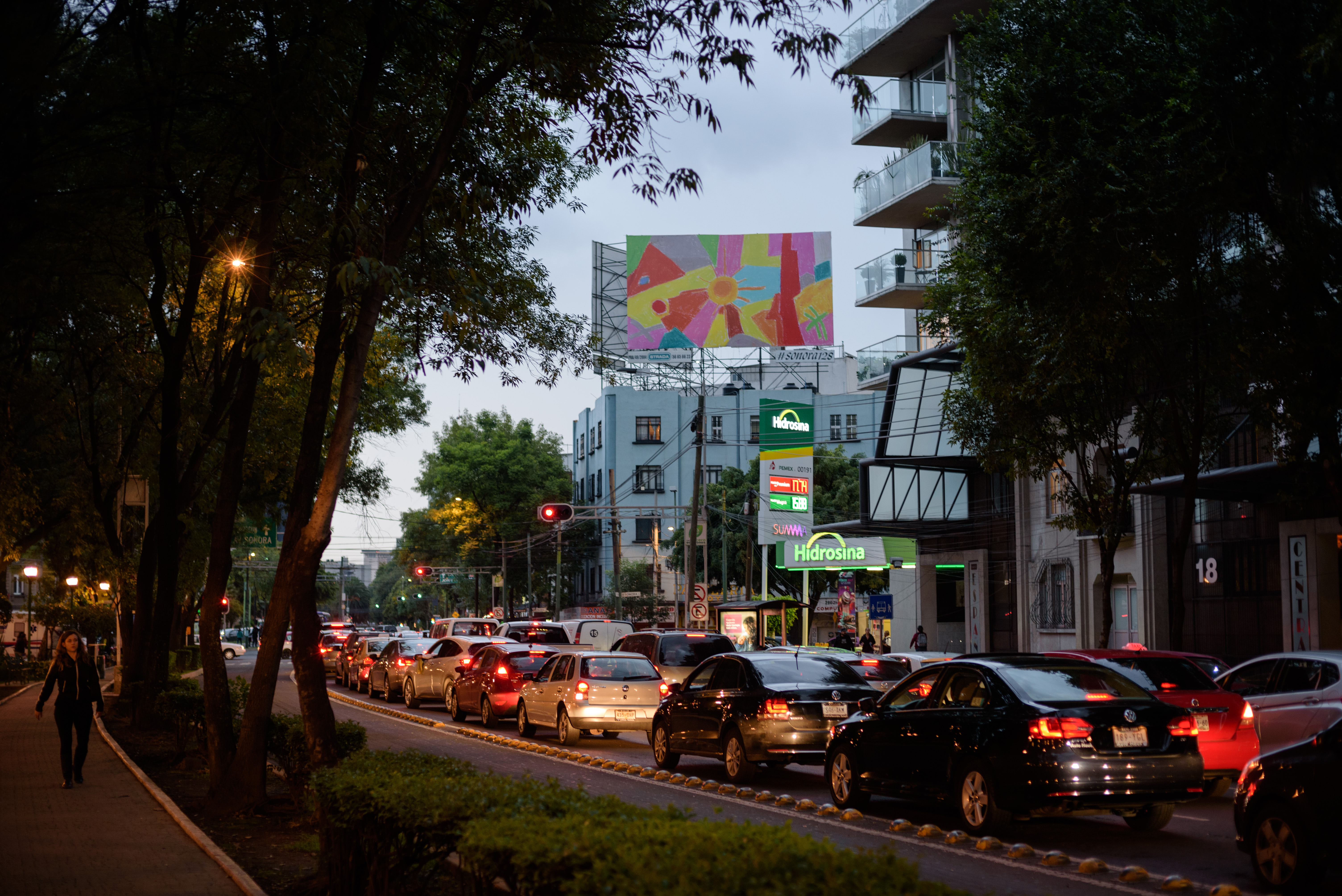 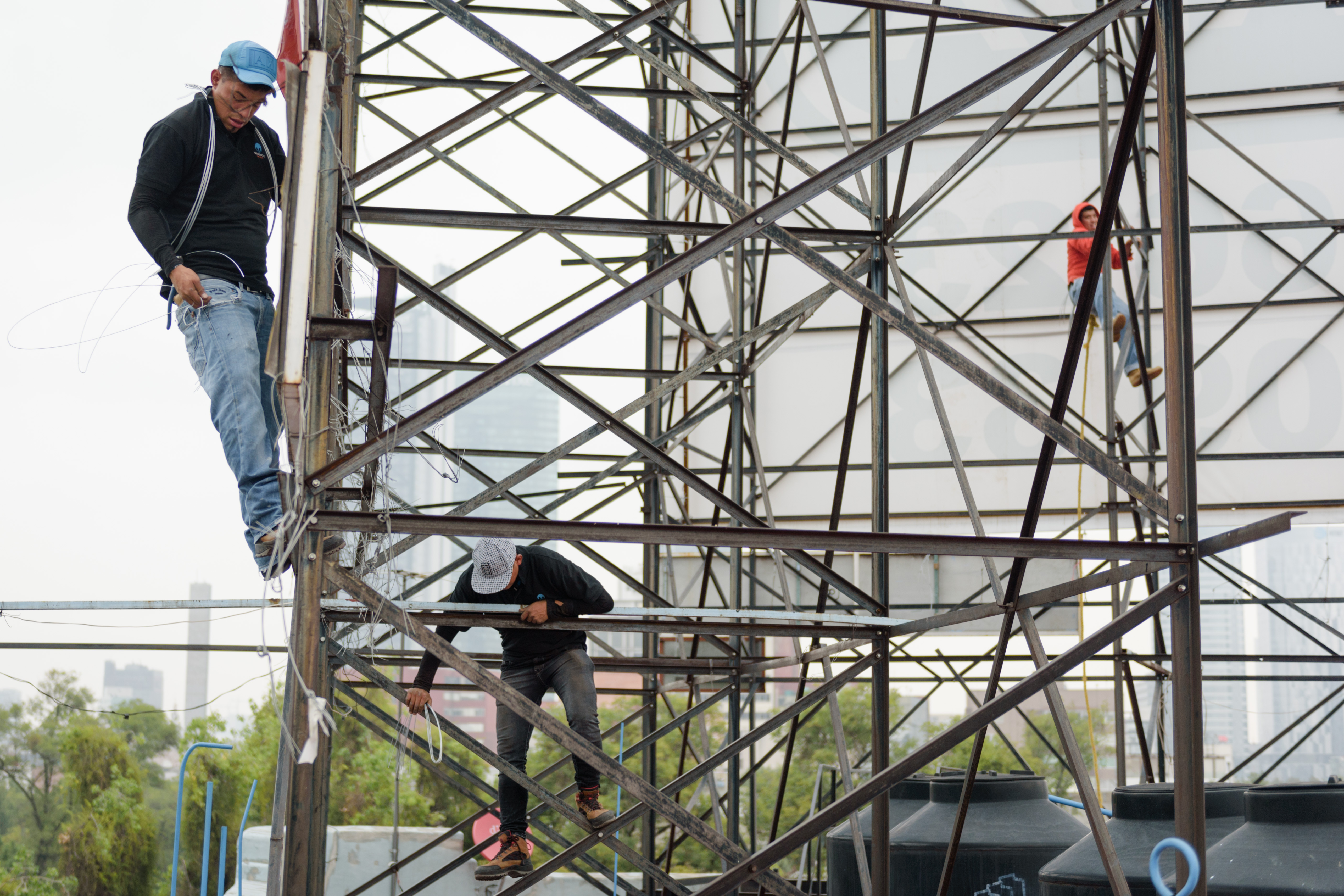 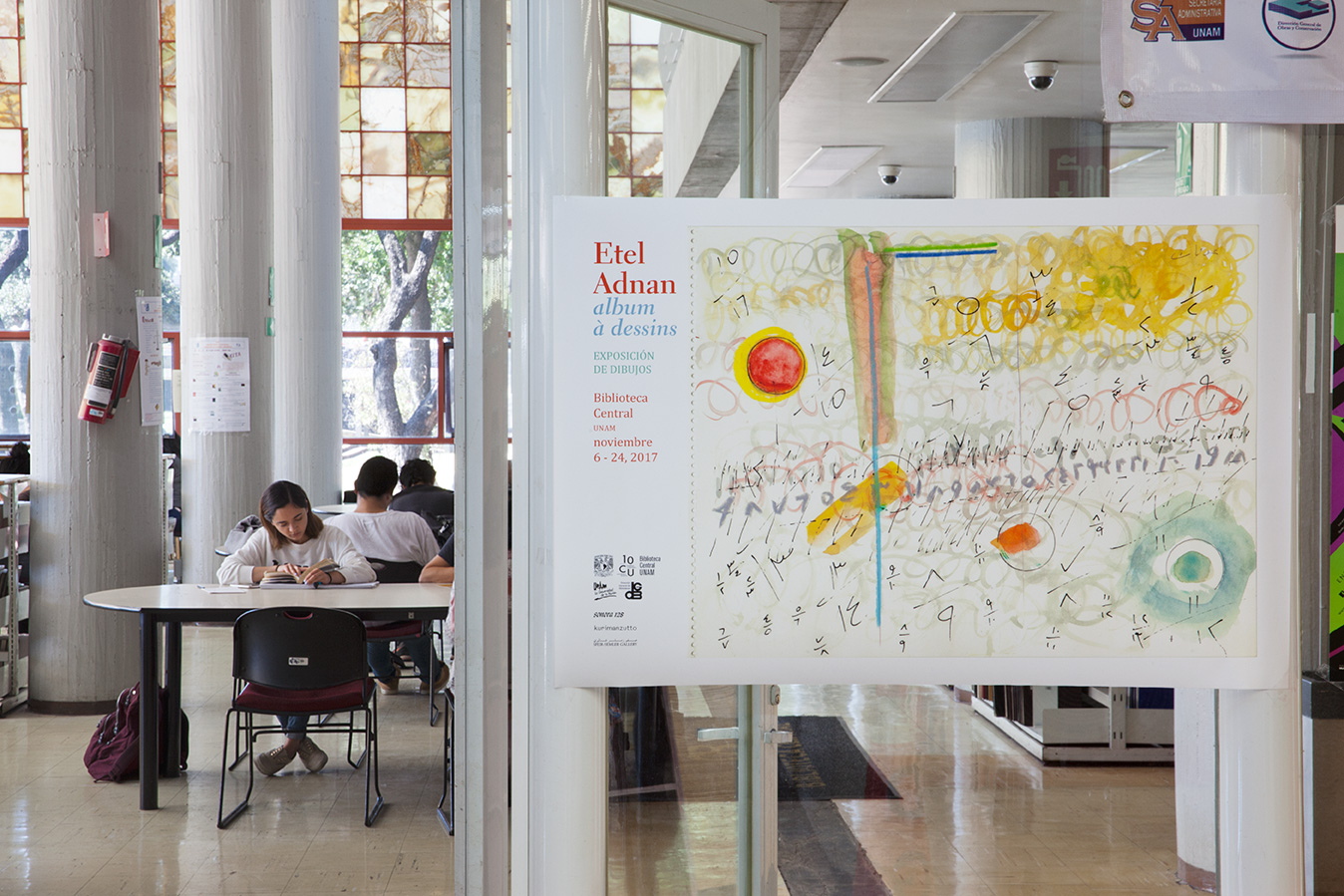 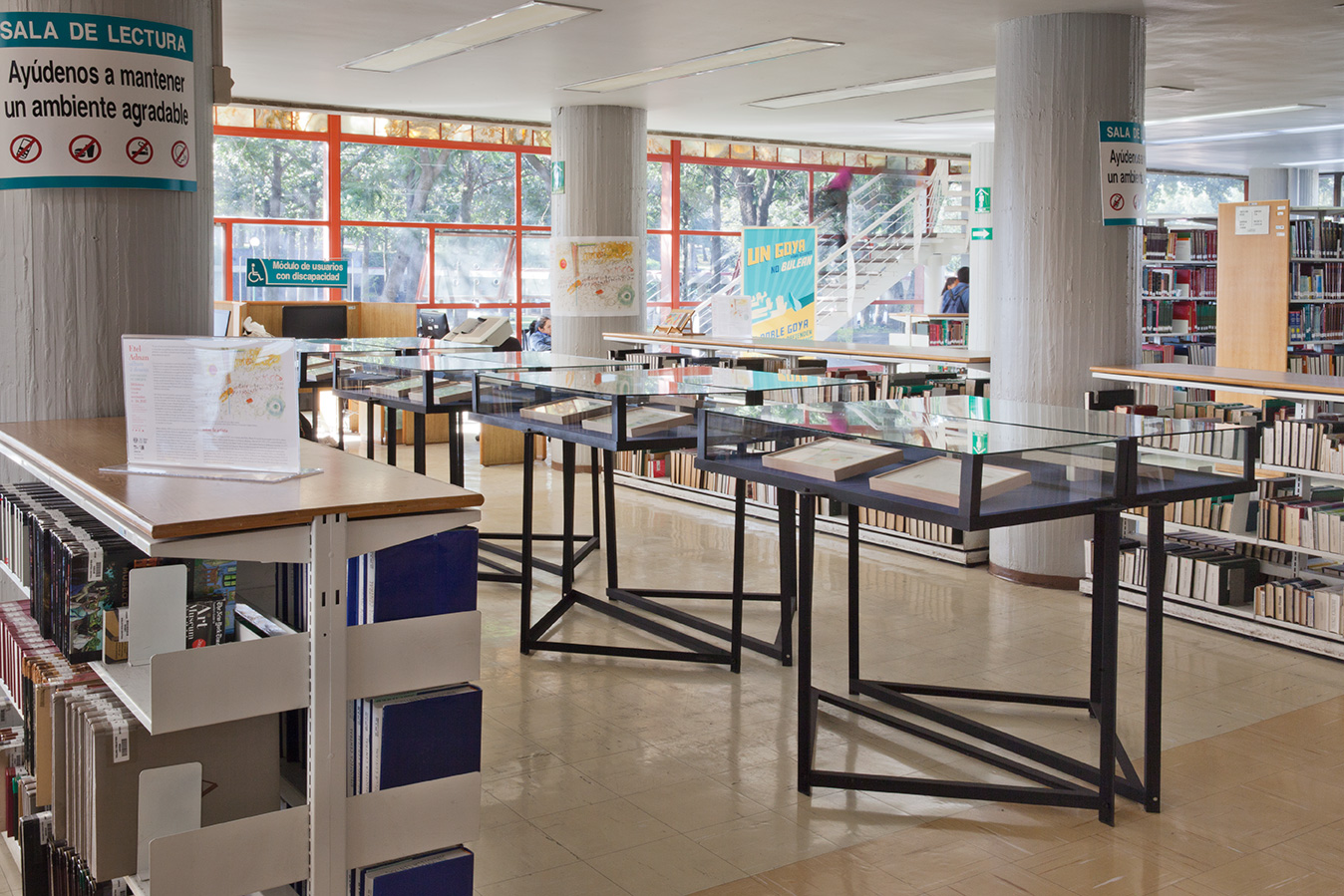 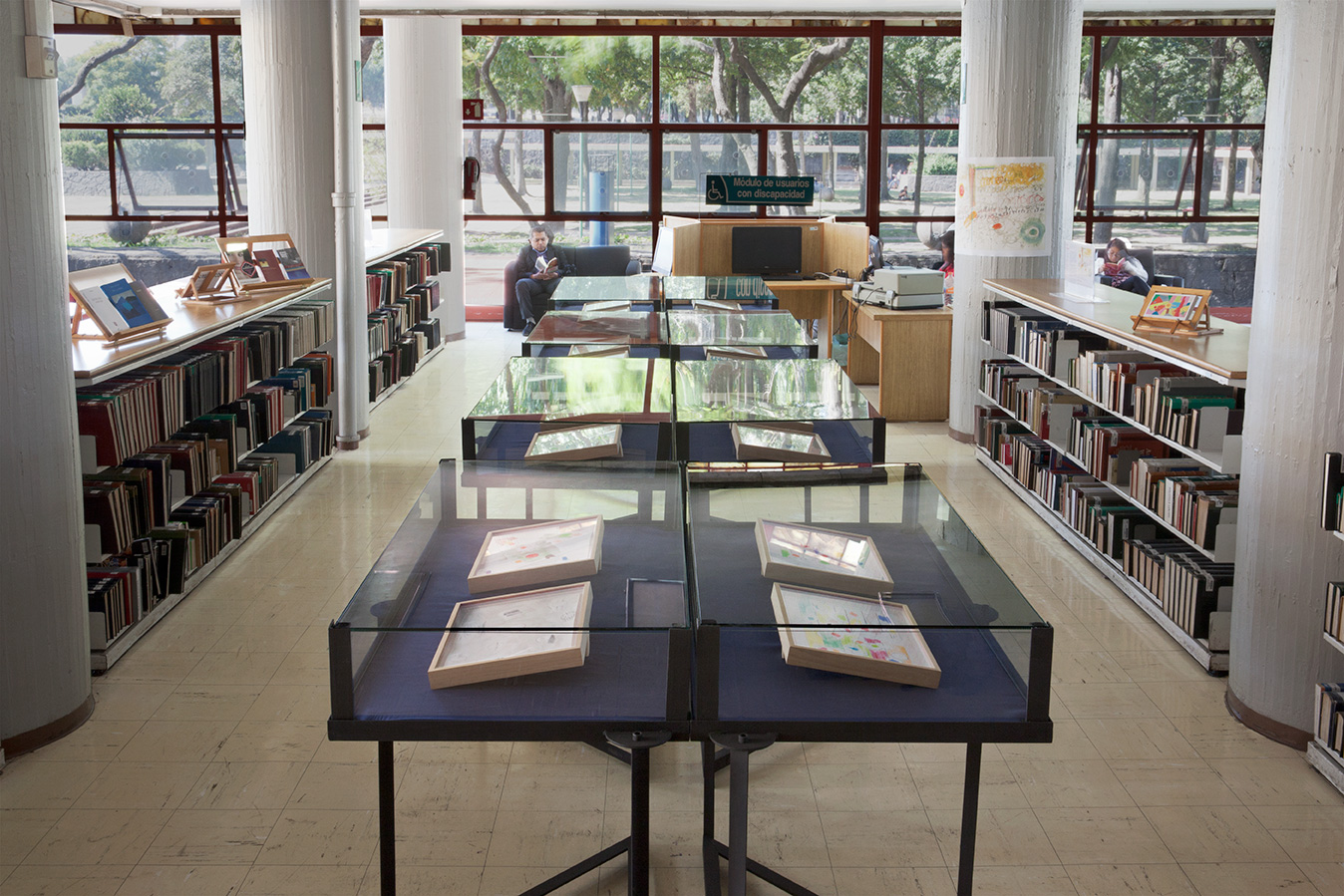 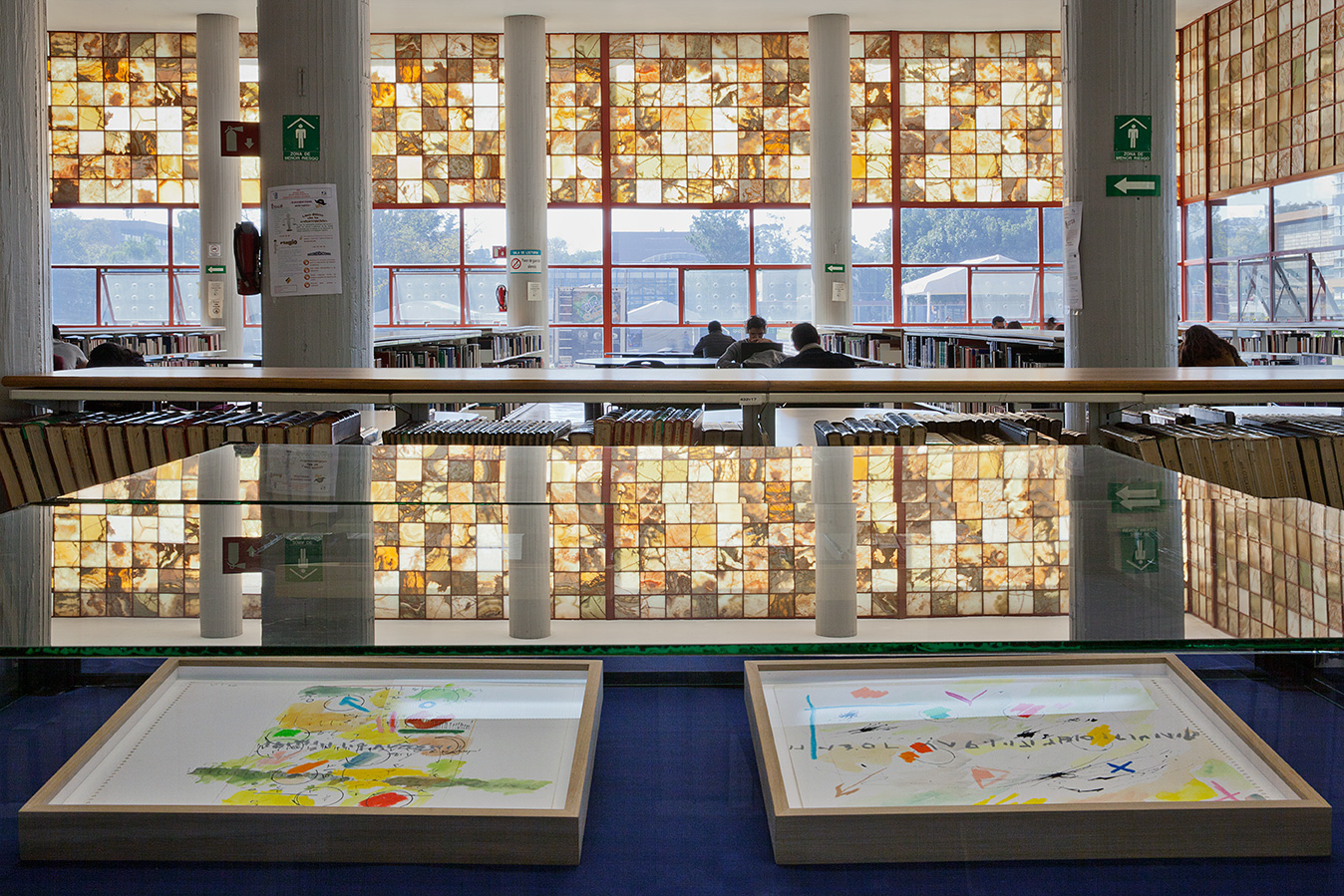 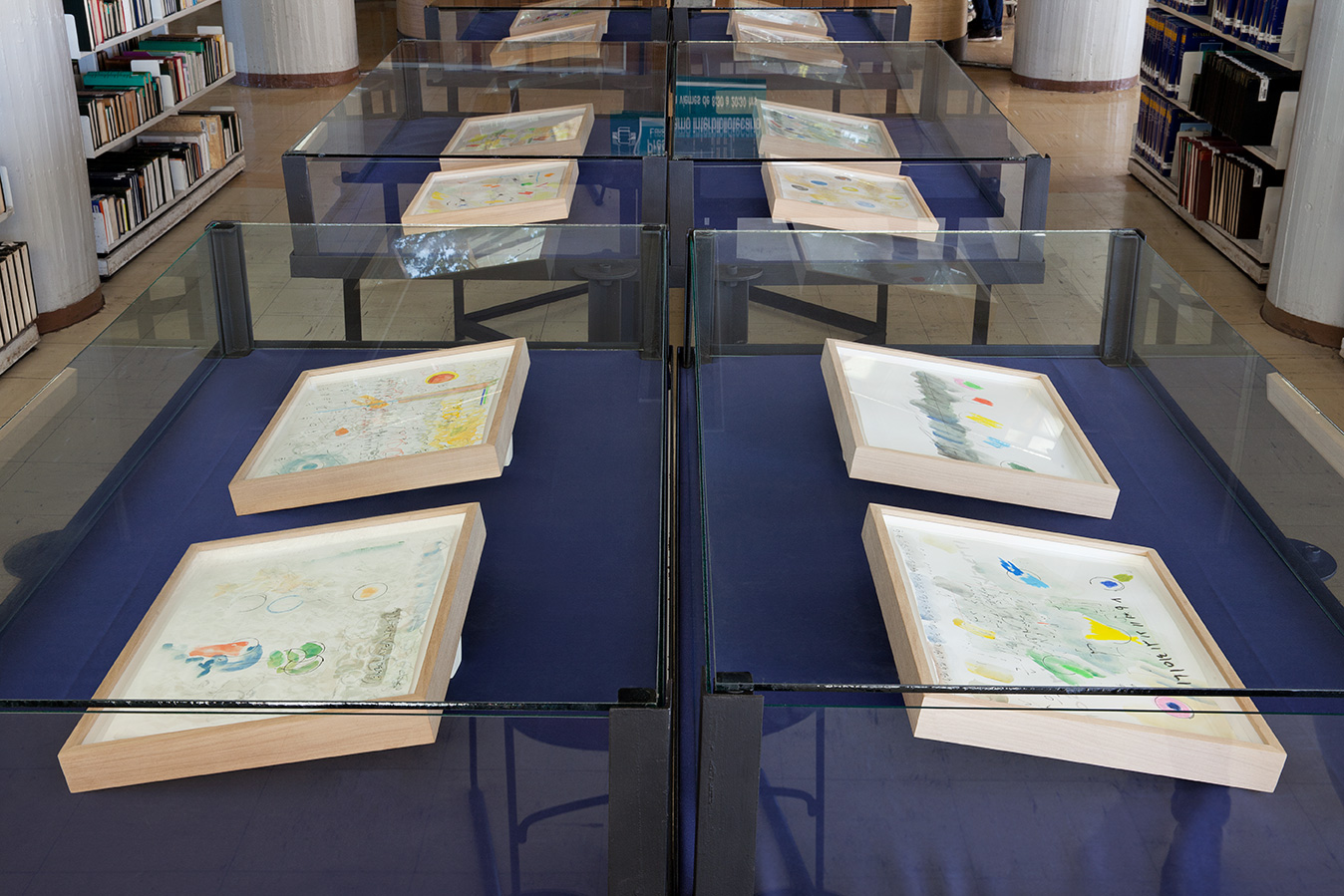 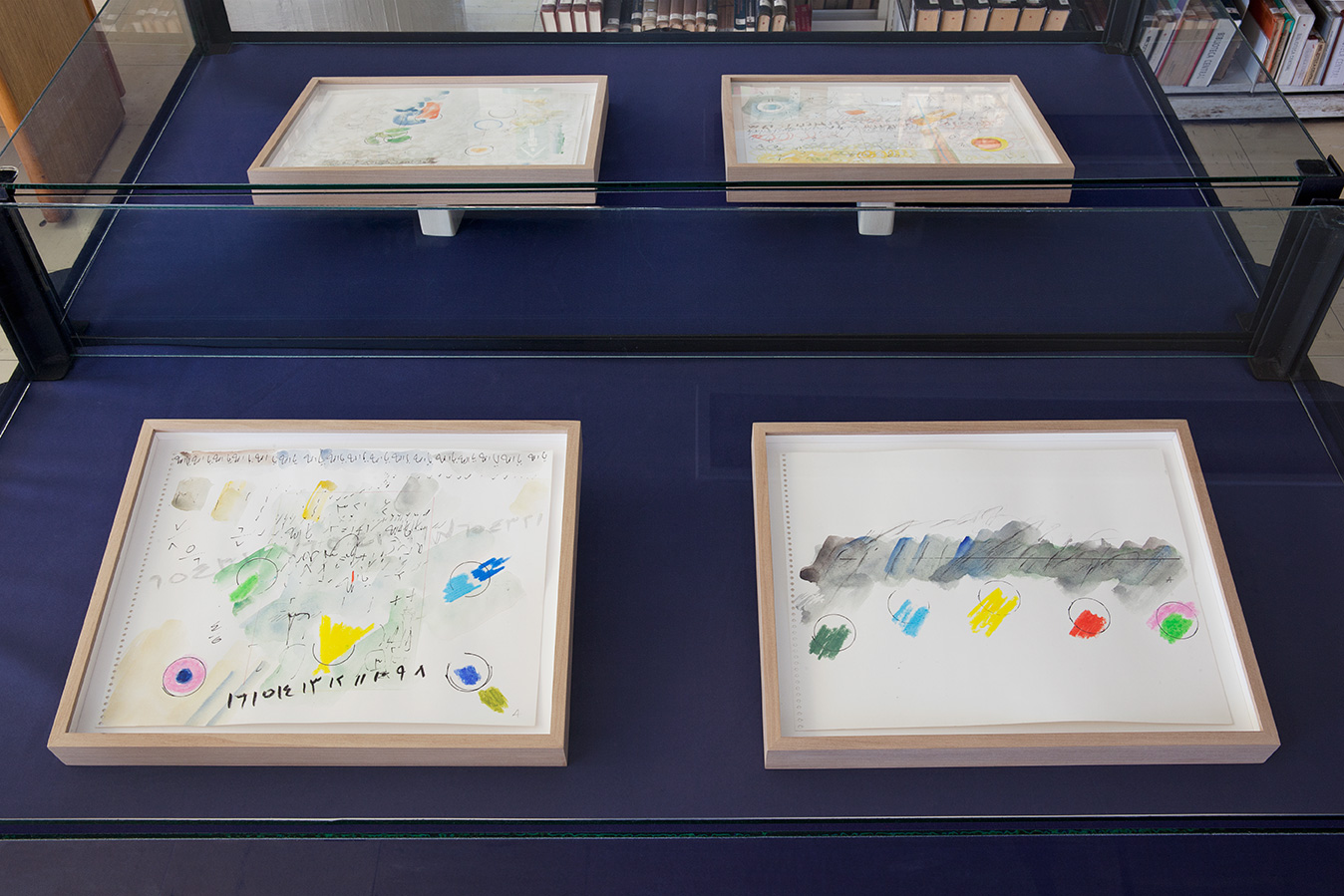 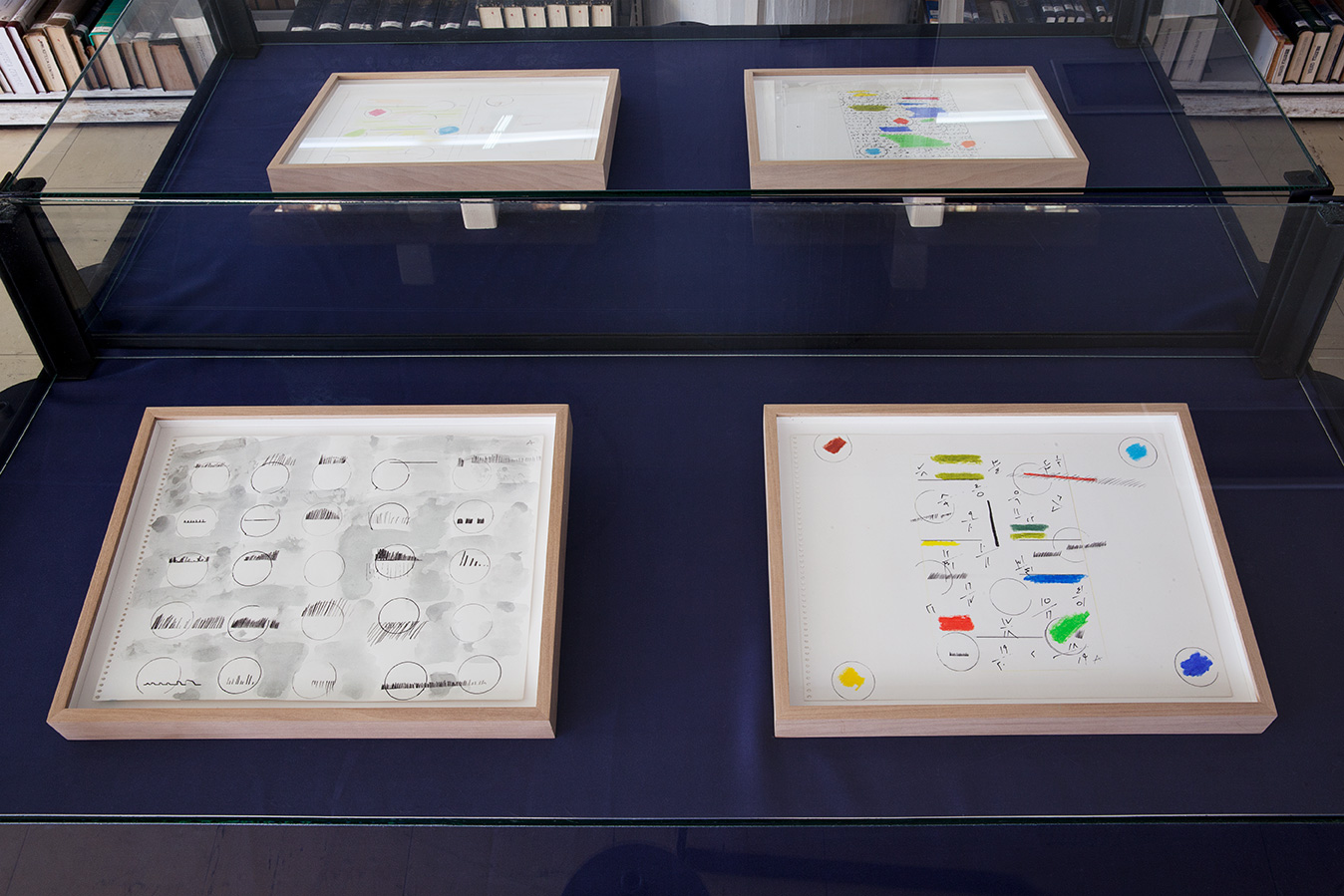 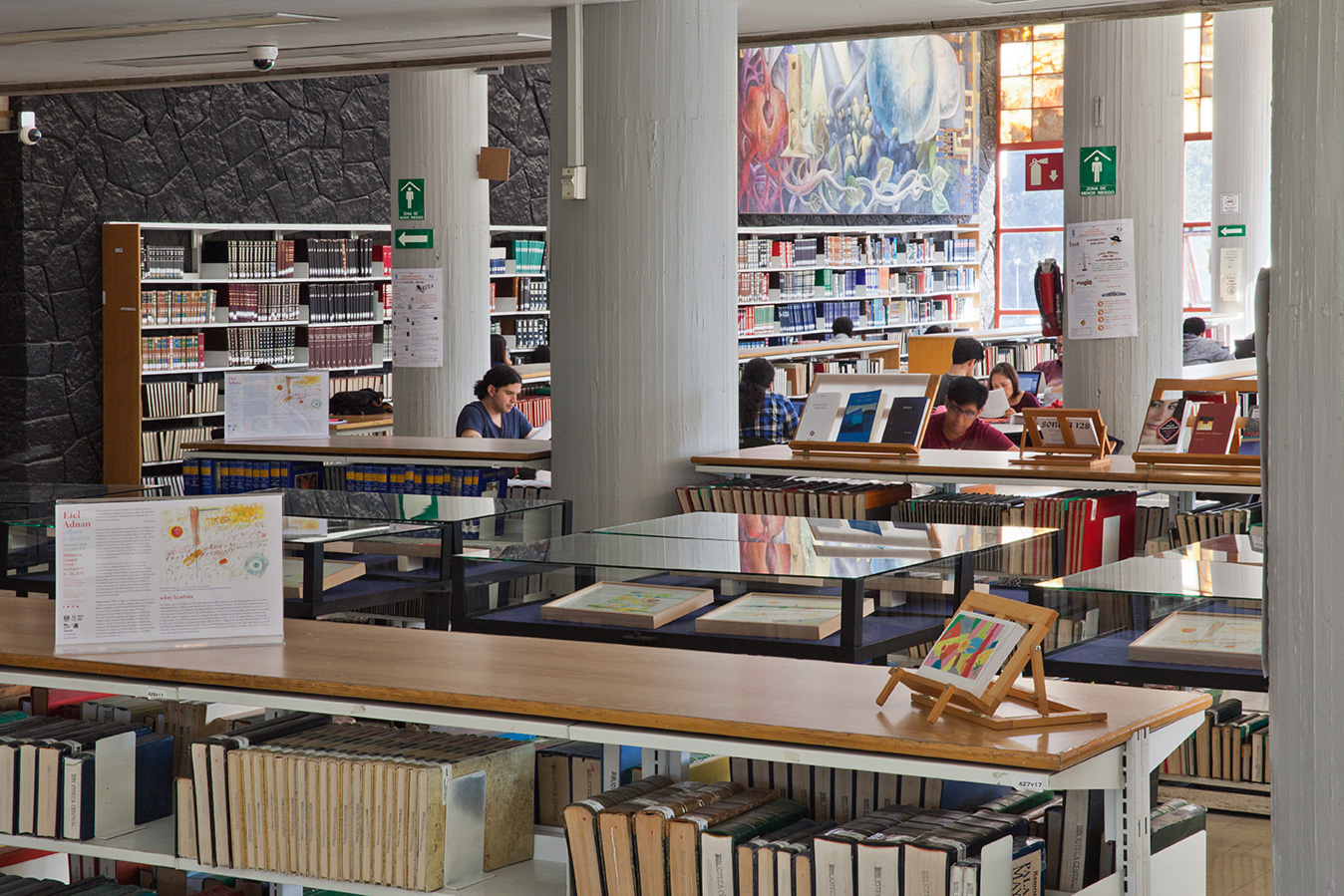 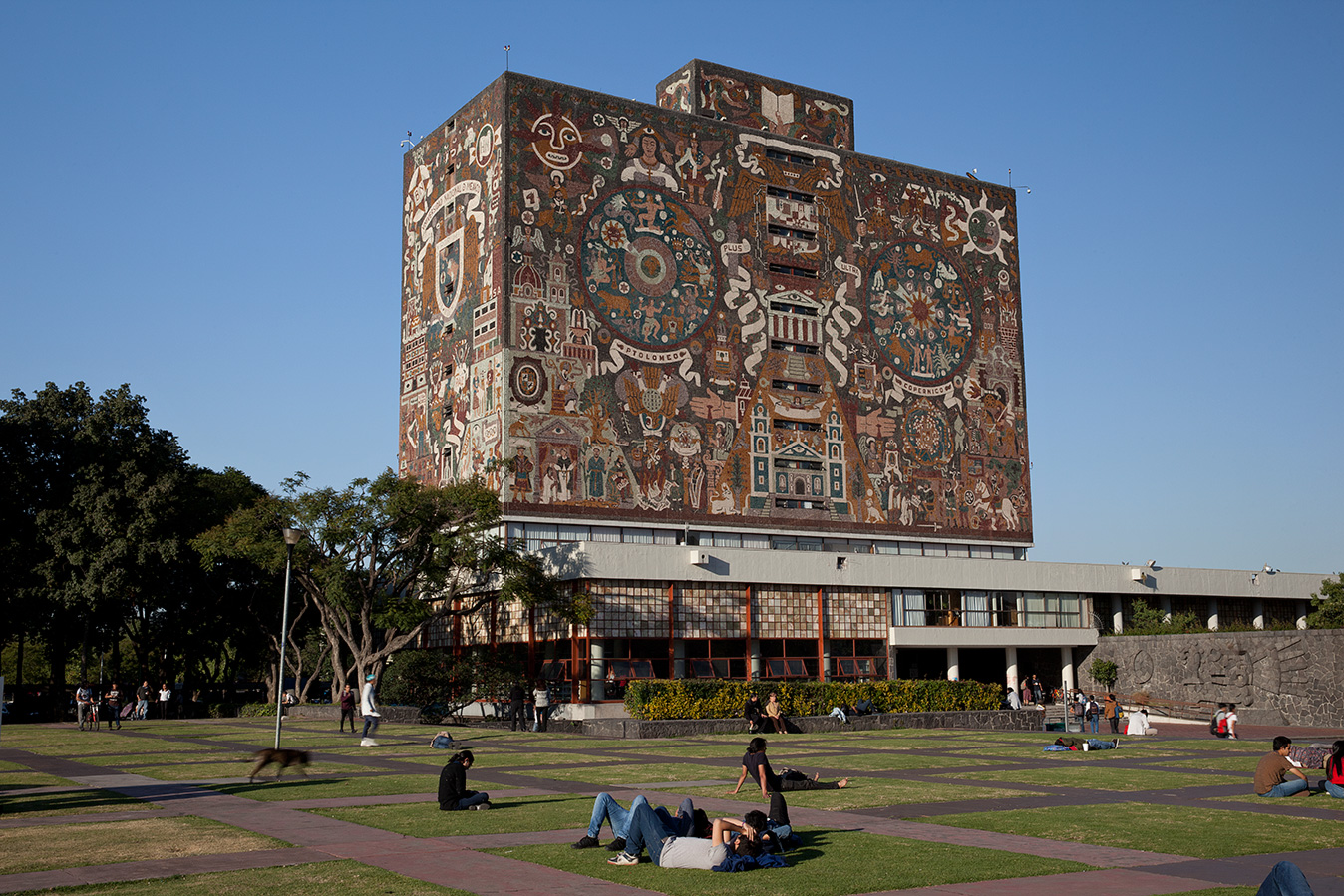 Installation views of The New Sun of the Aztecs, 2017. Photo: PJ Rountree

“Abstract art was the equivalent of poetic expression; I didn´t need to use words, but colours and lines. I did not need to belong to a language-oriented culture but to an open form of expression.” – Etel Adnan

The sixth edition of Sonora 128 is host to the Lebanese-American artist and poet Etel Adnan, whose work is exhibited for the first time in Mexico. Composed as a small drawing, its patchwork of bright pastel colors and detailed surface irregularities remind us of Adnan´s own hand as she hints at themes familiar to Mexico. Entitled The New Sun of the Aztecs, Adnan´s golden orb rising high over the city certainly does not intend to compete with the sun itself. Rather, the work nods towards Mexico’s ancient founding myth of the Five Suns–a complex story of relationships and hierarchies. In it, a cycle of construction and violent destruction leads to the creation of a present world that can only be sustained by continuous blood sacrifices to appease the Gods. This new sun stands as a poignant metaphor for the celebration of life and beauty, one closely attended by death and deprivation. Organized around this glowing globe, both floating and abutting each other in a pattern of strong lines and forces, are a mosaic of symbols. Among them a green cactus, gray cross and red circle, point to a relationship of religion, nature and ancient culture, which rarely peaceful, continues to shape the country.

Etel Adnan must be seen through the dichotomy of her work as both painter and poet. In painting she expresses joy, while in prose and poetry, her somber side and political consciousness manifest themselves. For Adnan, tragic and disturbing themes have no place in her visual work, which is fuelled by a universally understandable positivity. Here she focuses almost exclusively on landscapes, relying on clear, simple forms and harmonious color compositions. Her inspiration comes from a deeply felt connection with nature. The artist wants to evoke those same feelings in us, striving to render memories of pleasure and serenity. Her paintings are a visceral experience in the truest sense of the word.

Viewing Etel Adnan’s drawings in person is often an intimate encounter, yet her desire to reach a large and diverse audience is woven throughout her life. Having spent several months in Mexico in 1957, Adnan was influenced by Juan O´Gorman´s mosaic murals at UNAM´s Central Library. She later cited them in her wish to make mosaic walls and tapestries, such as the ceramic compositions created for the Qatar University in 2013. Discovering the encompassing power of exhibiting in public spaces, Adnan became convinced that art should be present for all to see, firmly believing that ¨beauty is for everyone.“

Etel Adnan was born in 1925 in Lebanon, and lives and works between Paris and Beirut. Widely known for her poetry, novels and plays, she moves fluidly between the disciplines of writing and art, as a leading voice of contemporary Arab-American culture. Adnan studied philosophy at the Sorbonne in Paris, at Berkeley and Harvard. From 1958–1972, she taught philosophy at Dominican University of California, San Rafael, where she then took up painting and dedicated herself to poetry. As a reaction to the Lebanese Civil war, Adnan wrote her famous novel Sitt Marie Rose in 1977. Awarded the France-Pays Arabes Award, it has since been published in more than 10 languages. Her paintings also rose to prominence following their exhibition at Documenta 13 in 2012. In addition, recent solo exhibitions include the Institut du monde arabe, Paris (2016), The Serpentine Sackler, London (2016), Haus Konstruktiv, Zurich (2015), Museum der Moderne Salzburg, Austria (2014) ‘Etel Adnan in All Her Dimensions’ at Mathaf: Arab Museum of Modern Art, Doha, Qatar (2014) and the Whitney Biennial, New York (2014). Adnan has received numerous awards for her contribution to culture, including, in 2014, France’s highest cultural honour, the Ordre de Chevalier des Arts et des Lettres.

Our special thanks to all of those involved in bringing this project to fruition, especially Sfeir-Semler Gallery, Beirut and Hamburg!